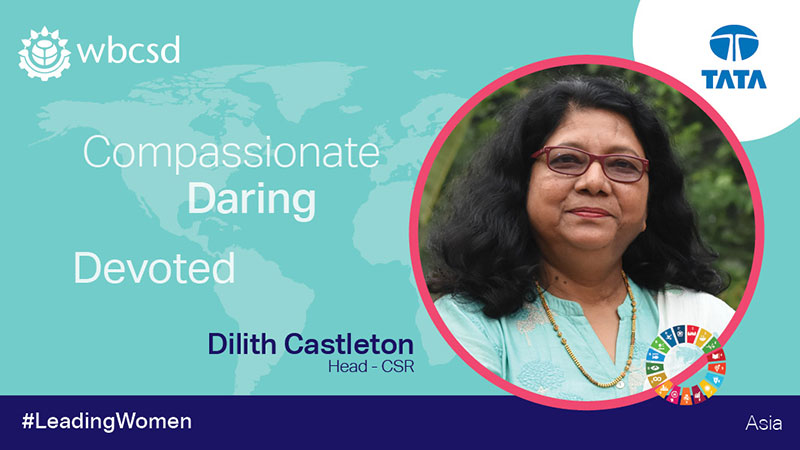 Ms. Dilith Castleton has credit of working for over three decades for the poorest and disadvantaged people at grass root level in the states of Jharkhand, Orissa and West Bengal, India. These states form the most backward region in the map of the country. Starting her career as a teacher in renowned schools in Jamshedpur, pursuing a course on social work was indeed a unique move on her part. A Masters in social work from Tata Institute of Social Sciences, Mumbai, was the feather in the cap, that transformed her life and surely of those who she relentlessly worked for.

Ms. Dilith hails from “Chick Baraik” – a tribal community of Jharkhand, and is immensely proud of the fact that she as a naïve, young girl was handpicked to serve the people of her land.  A Social development professional specializing in Family and Child Welfare, her inclination has been to alleviate and impact the lives of the most vulnerable of the society, especially women and children. She is a true advocate of the saying “Pen is mightier than the sword”, and has strived to initiate projects in the area of Education for the marginalised communities.  Ms. Castleton has successfully led programs relating to Girl Child Education, Enhancing Livelihood Programs, Women Empowerment, Improving Adolescent, Maternal and Child Health for Tata Steel, the pioneer company in the steel making business in the world. Ms. Dilith’s focus and determination also gave her the opportunity to be a part of the drafting body of the State Youth Policy in Jharkhand. She is a recipient of Late Leela Sinha Award for Best Social Worker in Chotanagpur region in Jharkhand for her work in Women Empowerment, Social Forestry & Agriculture. She has also been part various International knowledge and cultural Exchange programs. She has a plethora of experience of working and travelling extensively across continents and to interior far-flung regions of Jharkhand and Odisha, which are geographically remote and disadvantaged.  She has played a pivotal role in setting up the Tribal Culture Centre at Tata Steel, which focussed on recognising, reviving, and enhancing the tribes of the country.

Her rich pool of experience over the years has enabled to create a strong network for advocacy with the grassroots NGOs, civil bodies, and governments for advocacy to translate her vision into reality.

Currently, as the Head of CSR of Tata Metaliks Limited, a company manufacturing pig iron and ductile iron pipes in India, Ms. Castleton is spearheading the strategy, policy making, implementation, monitoring & evaluation, and measuring the impact of the projects as well as mentoring other companies. In a short span of two years, she has managed to positively impact the lives of people in Paschim Medinipur district of West Bengal. She has been instrumental in creating youth leaders in the tribal communities where she has worked. She comes across as a true leader, leading from the front, serving the people, and is a role model for many young aspiring women.

She thanks God for giving her the opportunity where she could integrate her passion with her profession, by giving back to the society and the people.

“Women inherently possess the potential to change the landscape of not only their own lives, their families but also the world. This needs to be complemented by equally sensitive men, so as to share the privileges in a fair and just manner.”